This tutorial shows how to set up the rc_visard to start using the SilhouetteMatch module and guides the reader to detecting the first objects.

In order to go through this tutorial, the following prerequisites should be met:

The rc_visard is properly configured:

One or more workpieces have been chosen and the templates for these objects have been generated:

We recommend to mount the rc_visard on a tripod or a static support as explained in the rc_visard’s Mechanical interface description.

The mounting should be stable such that the sensor remains static while SilhouetteMatch acquires data.

For SilhouetteMatch to work, all objects must be placed directly on a common base plane. This plane must be as planar as possible and should have as little texture as possible. It should be colored such that there is some contrast between objects and the plane.

For an rc_visard mounted on a robot, special handling is applied, as described in SilhouetteMatch Hand-eye calibration. 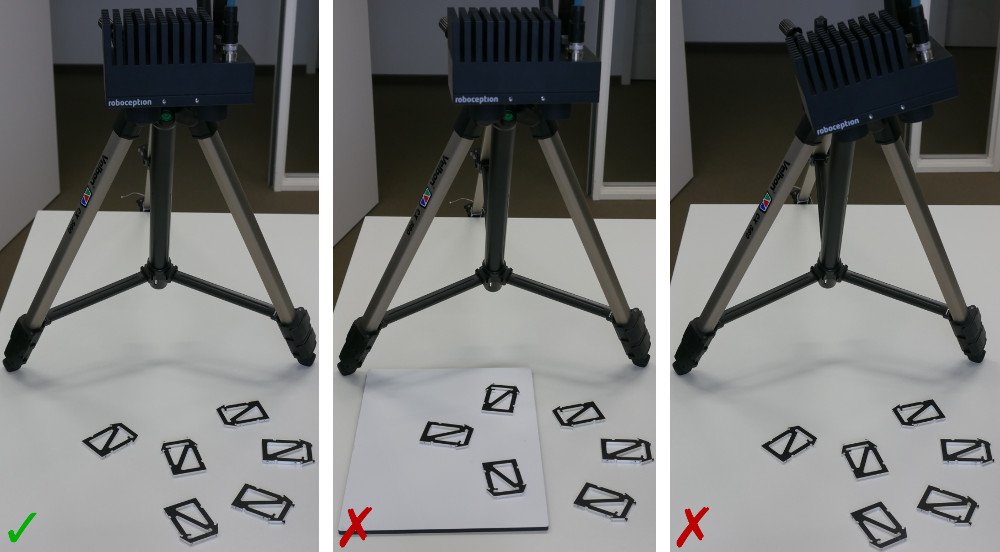 Fig. 33 Examples for good and bad base-plane configurations. Left: All objects are on the same plane. Middle: Objects are placed on different planes. Right: rc_visard is not approximately parallel to the base plane.

Good illumination of the scene must be ensured; a gain of 0 db (see Exposure and Gain Settings) on the Web GUI’s Camera page indicates that the scene is adequately illuminated. It is recommended to use diffuse illumination in order to avoid hard shadows.

For base-plane calibration as well as for object detection, it’s most important that the images are well exposed. The tutorial about Camera Parameters covers the steps required to get best quality images.

For stereo-based base-plane calibration (see Performing base-plane calibration), it’s additionally required to ensure high quality depth images, which is covered by the tutorial about Depth Image Tuning. It is recommended to employ a rc_randomdot projector to allow dense reconstruction of a texture-less base plane.

Fig. 34 Comparison of point cloud without (left) and with (right) projector. With projector, a much denser point cloud (green points) is produced, especially for the texture-less base plane.

SilhouetteMatch provides best results when the depth image quality is set to High. The projector should be operated in ExposureAlternateActive mode or the depth image Acquisition Mode should be set to Single + Out1, meaning that the projected pattern is not visible in the regular intensity images. Otherwise, the projector will interfere with SilhouetteMatch’s object detection process.

The configuration of the load carrier is described in detail in Configuring a load carrier.

After setting up the scene, SilhouetteMatch can now be configured.

The generated template must be uploaded to the rc_visard. The most convenient way to do this is via the Web GUI’s Modules ‣ SilhouetteMatch page. See the following video for a walk-through of the uploading process.

Configuring a region of interest¶

For configuring a new region of interest, the Web GUI offers an intuitive selection tool, which is shown in the following video.

SilhouetteMatch provides two methods for estimating the base plane: AprilTag based and Stereo based. Both are introduced in the following.

With AprilTag-based base-plane calibration, a plane is fitted through a set of AprilTags in the scene. At least three tags must be visible, placed such that they appear in the left and right camera image. The three tags should span a triangle around the objects, which is as large as possible.

Only tags of the family “36h11” are detected. The minimum size depends on the distance to the tags (see Tag reading for more information). A sample page with AprilTags for printing can be downloaded here. When cutting them out, please make sure to leave a white border around the AprilTags (see section AprilTag of the rc_visard manual). More AprilTags from family “36h11” can be downloaded from the apriltag-imgs repository.

The tags should be placed directly on the base plane. In case that is not possible, please refer to Offset parameter.

All “36h11” tags in the scene are used for calibration. A ROI can be used to select specific tags.

The following video shows how to perform AprilTag-based base-plane calibration via the Web GUI.

With Stereo-based base-plane calibration, the point cloud provided by the stereo matching module is used. SilhouetteMatch searches for planes in the point cloud and selects either the closest or farthest plane from the rc_visard, depending on the plane_preference parameter.

For stereo-based base-plane calibration, a dense point cloud is important. Configuring image parameters explains how to ensure that.

For more control on which plane is selected, a ROI should be used (see Fig. 36).

Fig. 36 Left: Scene with two planes in view of the rc_visard. Middle: By default, the most distant plane is selected. Right: By setting a ROI (petrol rectangle, marked with an arrow), the actual base-plane can be selected.

The following video shows how to perform stereo-based base-plane calibration via the Web GUI. 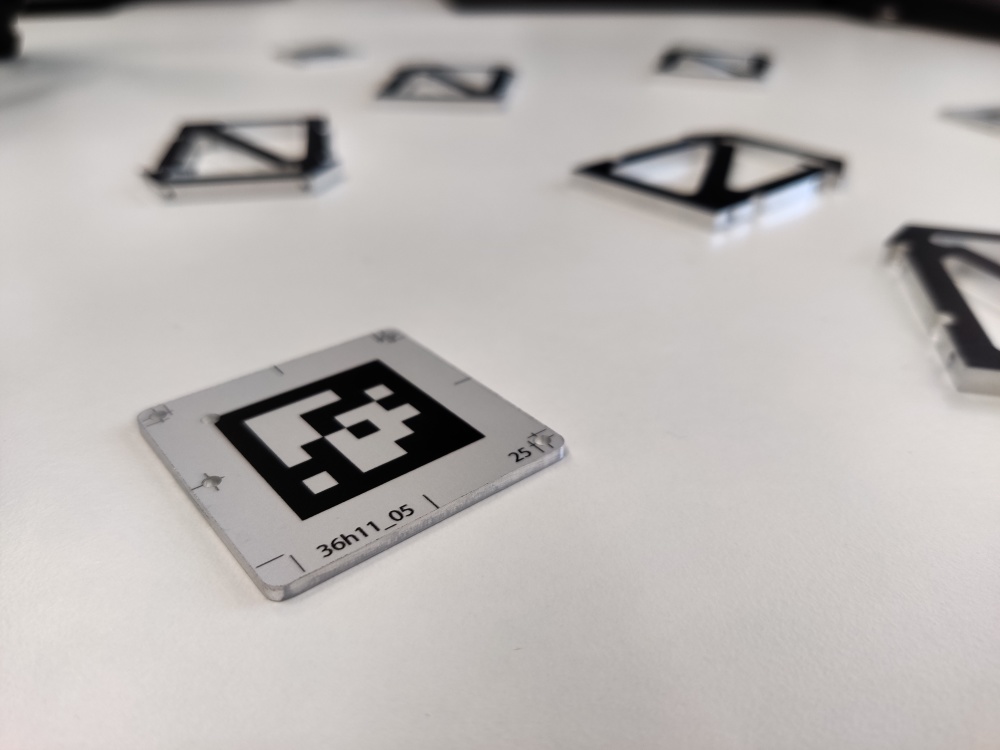 After base-plane calibration is finished, objects can be detected.

Object detection can be triggered in the Try Out section of the Web GUI’s Modules ‣ SilhouetteMatch page. Triggering via REST-API is possible as well, as described in SilhouetteMatch Services.

In the Try Out section, the template that is to be detected must be selected by its name. Then, the detection is triggered with the Detect Objects button. The result will be shown in the table at the bottom of the page, as well as in the visualization images on top. 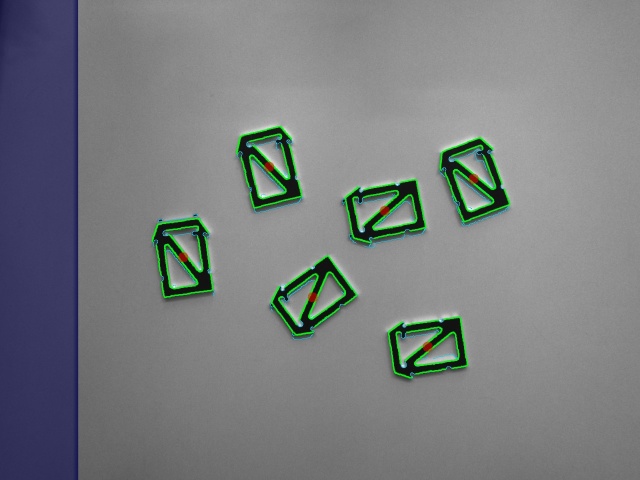 Fig. 38 Successful detection of a set of objects. Green: Detected objects. Light blue: Detected edges. Red dots: Returned (3D) poses of the object. Blue area on the left: Area where the left and right images do not overlap.

By selecting a ROI, the search for objects can be limited to a part of the image. 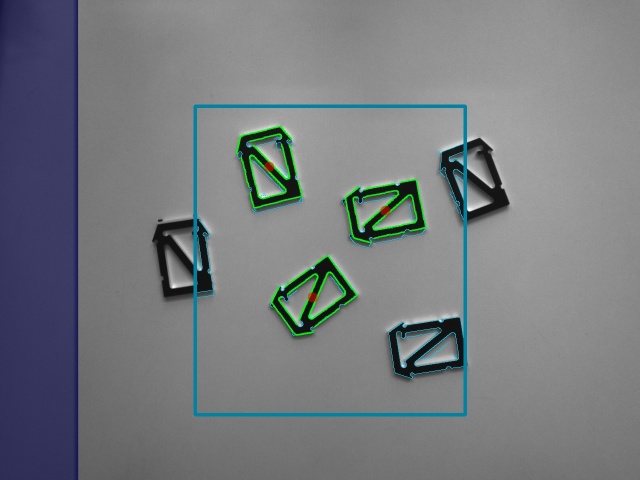 Fig. 39 A ROI (petrol rectangle) is applied to limit the search for objects.

The following video shows how to trigger the object detection via the Web GUI.

The object detection process is influenced by a couple of parameters. The parameters can be adapted via the Web GUI as well as the REST-API. In the following, the parameters are described.

The Quality parameter controls the resolution of the images used for object detection. The lower, the faster is the computation, but details of the objects might get lost.

In case the rc_viscore is used with SilhouetteMatch, reducing the resolution to Medium or Low often gives better results, because object boundaries become sharper. Only when very small parts need to be detected, the full resolution of the rc_viscore should be used by setting the Quality to High.

With the Maximum Object Number parameter the number of returned objects can be limited.

The Maximum Matching Distance (pixel) controls how exact the object template must match the detected edges in the image. The higher, the less strict the matching is, but the slower the computation will be. Too high values may also lead to false positive detections.

The lower, the less strict the matching is, but the slower the computation will be. Too low values may also lead to false positive detections.